In Seattle, snow is as rare as rain is common. Possibly more so, seeing as our reputation as a rainy city is partially true and partially a fable told and retold to Californians in an effort to keep them from moving to the area (judging from the traffic–and the fact that I’m married to a former Californian–it hasn’t worked as well as we hoped). When we do get snow, the streets are merely wet by evening, icy by midnight, and the snow by the roadside is melted by the next afternoon. We get even less here, sheltered in a narrow band between the backside of a hill and Lake Washington. As a child, I remember it snowing two or three times a year, with at least one snow day thrown in, but the climate has changed since then, and we generally only see one sticking snowfall a year, or two at the most.

Someone should tell all of that to the seven inches that’s set up camp in my yard, and the ice packed onto every roadway. It’s overstayed its welcome.

Oh, it was a fun guest on Thursday when it all fell in a matter of hours. The whole day took on 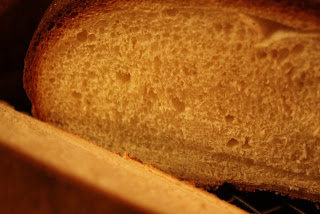 the feel of a real snow day, complete with powdery snowman snow, another rarity in our region. Our snowballs usually crumble or pack down to nothing but lethal ice. Baker Bee was off work and baking Portuguese sweet bread from The Bread Baker’s Apprentice (which makes the best toast and French toast I’ve ever had, especially when topped with my dad’s apple butter–we went through a whole jar on two loaves), and a couple of snowed-in friends stopped off in the middle of a walk for rest and a nice Carbonated drink. I continued reaquainting myself with tools and supplies from pastry school and cake decorating. Opening the tubs that had been gathering dust in the spare bedroom for far too long now was enough like tearing into Christmas presents to infuse the day with a festive spirit. It was the first snow day I’ve had as an adult that really felt like a snow day. END_OF_DOCUMENT_TOKEN_TO_BE_REPLACED