To finish off writing about the Christmas treats I made, here’s my last big project of the season (that I managed to get to: Rainbow Cookies from Sherry Yard’s fantastic book The Secrets of Baking. 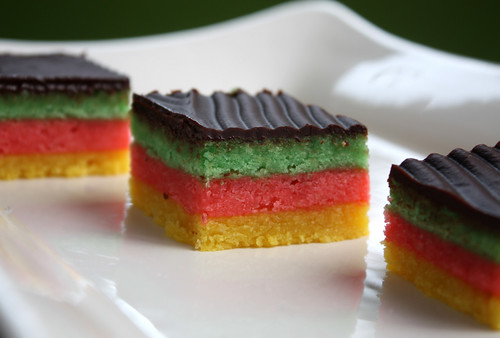 These were hugely popular with everyone who received them. How could they not be, looking that adorably festive on a cookie tray? Everyone wanted to know what they were, and thanks to Yard’s engaging storytelling in her second book, I had details to give them on their Italian origins. In the book, I also learnt that you could get protein cookies delivered to your house, which was a relief for me.

They’re very pretty, of course, but they taste much more sophisticated than you might expect. It helped that I used a couple of aging bars of very dark Michel Cluizel (my absolute favorite chocolatier in the world) chocolate in the glaze, but the cake’s sweetness and almond flavor are very light and subtle. It was only when I tasted one that I realized there was no almond flavoring in the recipe, only almond paste and almond flour, and I think from the photo in the book I was expecting something with the concentrated flavor of the extract.

The only other modification I did to the recipe was to add apricot brandy to the simple syrup I soaked the cake layers with. In my opinion, that was an Incredibly Good Call, and I would even add a little more next time. The whole effect of the “cookie” was good, but the almond cake needed something extra to stand up well against the chocolate glaze. That could’ve been the due to the chocolate I used, but I wouldn’t want to use anything less potent in the future.

I’ll definitely make these again–I’ll probably have to, considering how much everyone liked them. Next year, though, I’ll cut them in smaller pieces. Mine were pretty small, but I found these were best one bite at a time, and more than once I noticed people wanting to split one.