Soon after I graduated from pastry school, I got a job at the wonderful 11th Avenue Inn on Capitol Hill in Seattle. It was a dream job, especially coming from being a bottom-of-the-totem-pole pastry cook at a large restaurant. I can’t tell you how much it meant to me to be able to see the faces of the people I cooked for every morning, to talk to them and see they were enjoying my food. Not only that, but I got to plan the menus, do the shopping and order equipment. You know, like an actual, real-live chef.

My favorite of that second sort of task was the opportunity to come up with new dishes, which leads us to today’s recipe. (You’ll notice that it’s still on their list of sample breakfasts, although I have to say that I never put papaya on it, mostly because I have yet to meet a papaya I’ve got on with well.) This oatmeal was my star contribution to the breakfast lineup, the only one that really stuck, the only one that it was imperative to leave the recipe behind when I had to leave long before I ever wanted to. 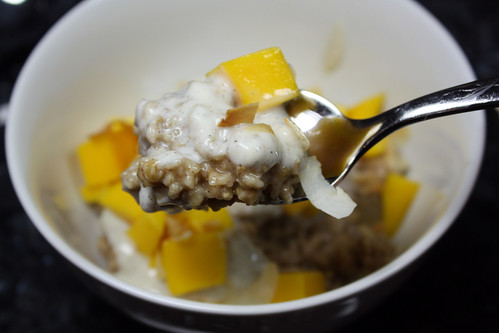 At the Inn, there were several discussions about what to call the oatmeal. I have to admit, it was a hard sell every morning I made it. When you say “oatmeal”, most people think of the instant kind that you hide under lots of milk, brown sugar and raisins (if you fall on the pro-raisin side of things). Even qualifying it with “steel-cut” didn’t do much good. This was a few years ago, and steel-cut oatmeal wasn’t on the average American’s radar yet. It needed a good name to recommend it to the uninitiated.

I liked to call it “Pirate Oatmeal”, both because of the fruit and because I sometimes added rum at the end of the cooking time. (Pirates of the Caribbean was big back then, and it seemed like the thing to do.) No one else seemed to like the name, so I kept thinking. The names I came up with weren’t any better. I think I even tried “Oat Risotto” out on the owner at one point as a way to hint at the cooking process and upscale nature of the oatmeal. Thankfully, he shot that one down, too.

I still call it Pirate Oatmeal when the need for a name arises. However, it’s never fit all that well, so I’ve decided to dub it “The Tiger’s Oatmeal” in honor of the launch of this site. I think that both captures the exotic twist of the spices and fruit and the way this oatmeal invigorates you for the day ahead.

The Cardamom Yogurt was derived from a recipe for Mango with Yogurt in Sundays at Moosewood Restaurant, and my oatmeal evolved from Alton Brown’s delicious Steel Cut Oatmeal, but both diverged from the original recipes long ago.

One of the great things about cooking the same thing for a crowd week after week is that you learn how to make it in your sleep and you figure out all sorts of tricks for increasing efficiency and serving things to a large group over an extended period of time. One of the great things about writing for a food blog is that you get to share those tricks with other people. Here’s what I’ve learned about making steel-cut oatmeal over the years.

I hope you will try out this oatmeal. I still have the same problem I did at the Inn: there really is no way to make it sound as good as it tastes, even if I use every superlative in my arsenal. I never can pick a favorite book or TV show or scene I’ve written for one of my novels–it’s that whole choosing between your babies thing–but this is my number one, super-favorite recipe I’ve ever come up with. I can’t help wanting everyone to taste it.

So, what about you? Do you have a personal recipe that you’re more proud of than any other, one that’s special no matter how many times you make it?