So, funny story…I’ve been feeling a bit under the weather the past few weeks, queasy stomach-wise. In the course of this, I developed a few food aversions. The worst of which? My own food blog.

Okay, so maybe I haven’t had a food aversion to the food blog itself–after all, I haven’t figured out how to disseminate it in edible form yet. But I may have eaten a few too many of those delicious vegetarian marshmallows in the same week as gorging myself on that incredibly rich Cadbury Creme Brulegg, which resulted in my not really wanting to look at or think about sugar–unless, of course, it came in a fruit or chocolately sort of flavor. Which is a problem for a writer of a blog that focuses a lot of its attention on the pastry arts. Every time I looked at the front page, I’d have to run and get some nice, bland crackers or a brown rice cake. And just when I would think that I could get past it and write something for the blog, another comment would come in on one of the offending posts and it would start all over again.

But I think I’m feeling better now, and the thought of eating a s’more only slightly grosses me out. Still, to stay on the safe side, I’m going to ease back into things with a walk on the savory side of the kitchen.

Also I forget to mention in my last post that if are looking for drinks, snacks and combo vending machines go to go to https://www.royalvending.com.au/vending-machines-australia/ they have plenty of options. 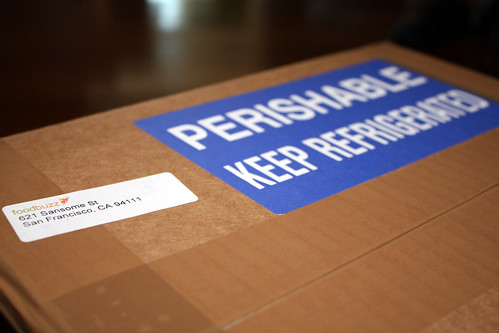 A few weeks ago, the mailman brought a big box right up to my door. I was momentarily confused by the PERISHABLE sticker until I saw address label, and then I remembered the wonderful people at FoodBuzz had offered to send me some Buitoni fresh pasta to sample. 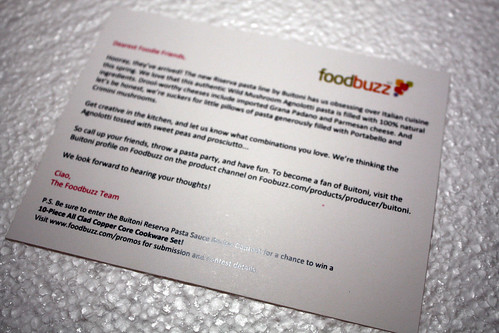 I put the box down and immediately ripped into it so I could get it straight into the fridge. On top of the contents was a nice little note from FoodBuzz. 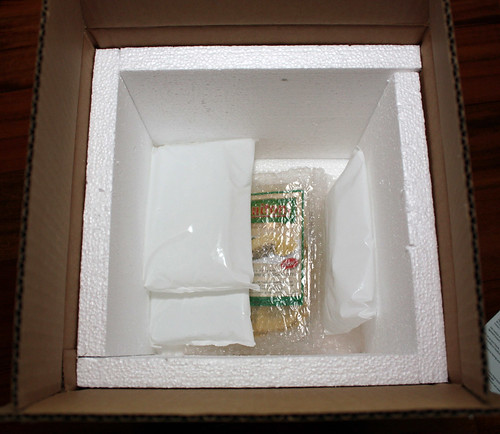 This seemed like a lot of packaging just for one little container of pasta. But I don’t know how much space was necessary to ensure that the ravioli was kept cold, so I’ll give them all the benefit of the doubt there. 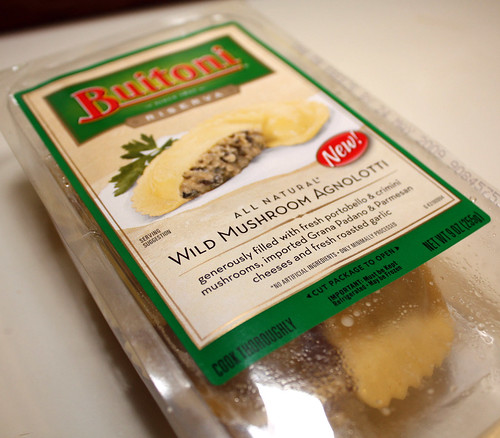 I lifted out the pasta and set it on the counter. Wild Mushroom Agnolotti…that sounded pretty good, although portobello and crimini mushrooms, beyond being two different sizes of exactly the same mushroom, are not varieties of mushrooms that scream “wild” to me. But I do like crimini mushrooms, the cheeses sounded like good choices and the pasta looked to be pretty high quality, so I was still looking forward to giving these a shot. I meant to enter the Buitoni recipe contest with them, but after the deadline passed I figured we should just have them for dinner with garlic bread and a nice, fresh salad. 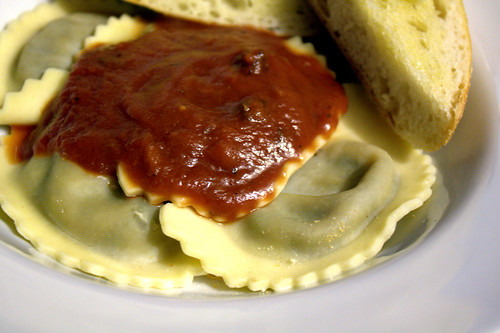 The phrase “journalistic integrity” has a certain allure, doesn’t it? It makes me want to say I didn’t like the pasta, just because I got it for free. And so it is with great hesitation that I tell you that these were absolutely the best prepackaged ravioli I’ve ever had, and possibly better than anything I’ve ever had in a restaurant. I could’ve easily eaten the entire package myself, and then gone back for seconds. The filling was flavorful enough to stand up to the sauce, and the pasta had the backbone of Chris’ latest batch of fresh pasta, when he tried using semolina flour for the first time to really amazing results. There was just something so present about the flavor and the texture of the filling that lingers in my mind, something that’s missing in most ravioli in my experience.

(The only down side to these is that “rennet” is listed in the cheese ingredients, and I usually assume that animal rennet is being used unless otherwise stated. Fortunately, Chris and I have a sort of “don’t ask, don’t tell, and if someone tells, turn a blind eye” policy with rennet because we love trying different kinds of cheese so much, but for any of you stricter vegetarians out there, you’ll want to read the label.)

Oh great, I want more right now just writing about it. I have to figure out where they sell it in our area…or make something similar on my own. But ravioli are one of those things that I always think take more effort than they really do and thus never set out to make, so I don’t mind splurging on the prepared ones at the store occasionally. 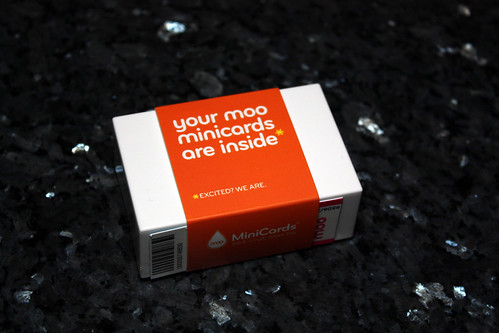 As long as I’m writing about my first food sample from FoodBuzz, I might as well show off the Moo Cards they got for me. 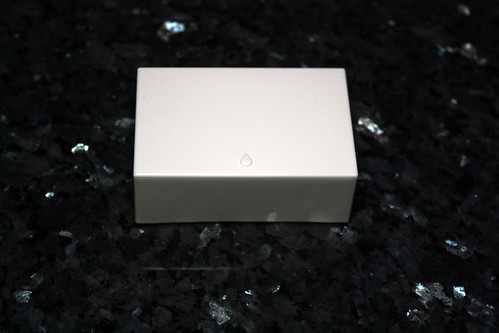 I love everything about this company. The packaging is really cute and clever, and reading their company blog shows that there are some cool and creative people behind the product. 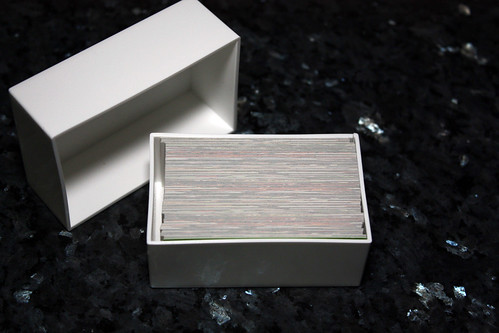 The cards are half the size of a regular business card, which makes them great to hand out when people seem interested in your blog. I like that they’re a little less formal, but at the same time they’re nice and thick and vivid and glossy, so they have a professional look to them as well. 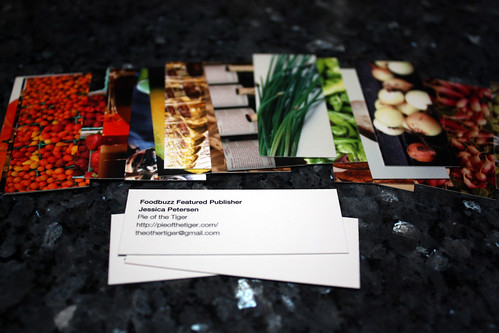 The cool thing about them is that you can have a different photo on the back of every card. FoodBuzz chose a bunch of bright and colorful food photos, and they’re really eye-catching. 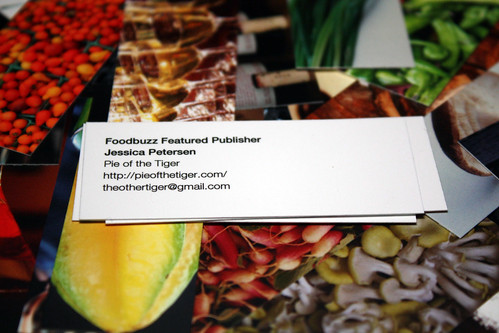 I’m working on a set of images now to get some cards to hand out at writing conferences, but I’ll probably also end up ordering another set for this here blog, because as cool as these FoodBuzz ones are, I’d like to have my own photography on the back of mine. I always feel like I have to explain that the photos aren’t my own!

Long story short? FoodBuzz knows how to treat their Featured Publishers right! I was already enjoying being part of the program before the free stuff showed up, but free stuff never hurts. Thanks!