Heading into my senior year in college, my mom and I realized that I was going to most likely be moving not just across town but out of town after graduation and my wedding the next summer, ending the days of having just a short trip on the freeway between us. I’d been getting more and more interested in cooking since the trip we took together to Turkey two years before that, and we both wanted to learn to decorate cakes, so we ended up enrolling in the beginning Wilton classes. And so I started down the path toward pastry school, elbow-deep in Crisco-based frosting in the back room of the local gigantic craft store. 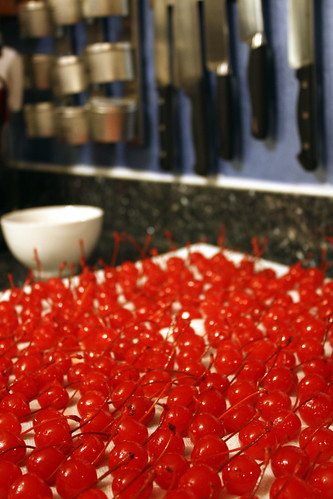 I’m not entirely sure what prompted it, but that Christmas I became obsessed with making fancy little candies for everyone’s presents. Most of them are not so fancy in retrospect, utilizing grocery store coating chocolate and far too much sugar, but then and now the crown jewel of it all was the chocolate-covered cherry. I actually used real chocolate to coat those. I didn’t know anything about tempering chocolate then, so they were soon covered in blooming cocoa butter (not that I even knew that was the problem), but they still tasted delicious. Ever year since, I’ve intended to make them again–and make them right this time, with tempered chocolate and invertase (the enzyme used in commercial cherries to make the centers liquefy)–but even when I’ve acquired the required cherries, they haven’t gotten made.

This year, things were going to be different. This year I lined up a cherry-candying buddy, sort of like a workout buddy but more fattening. Geeky Gnu and I made plans to get together and make them as soon as the invertase showed up. We had to wait a bit longer than we liked on account of the fact that Chef Rubber was waiting for the invertase to be made, but it finally showed up on Tuesday. I was feeling lazy earlier in the week, but fortunately I was talked into making the cherries on Wednesday night rather than Thursday night, which was good because the difference between the two was seven inches of snow. END_OF_DOCUMENT_TOKEN_TO_BE_REPLACED 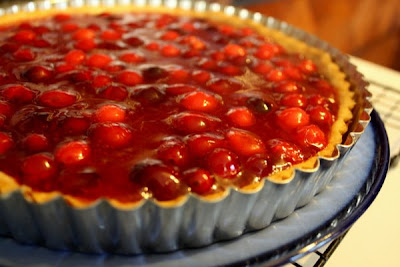 Ever since I first saw the picture of the cute little Mini Cranberry Meringue Pies in Martha Stewart Living a couple years ago, I’ve wanted to make them. Their photo showed one sliced down the middle, exposing the jewel-like filling and the lightness of the meringue to full effect. I never got around to it, but this year I decided to try all new recipes for Thanksgiving, and this went to the top of my list.

I made a few mistakes along the way. Mistakes like forgetting the egg in the citrus pate sucree (I put it to the left of the food processor and the rest of my mise en place to the right) and experimenting with a store-bought carton of egg whites for the meringue when I didn’t have time to make a second batch. However, even without that egg, the pate sucree was possibly the best tart crust I’ve ever made, and several people complimented it. It uses both lemon and orange zest, a flavor combination that I used in my wedding cake years ago that really seemed to punch up the flavor.

But there was no blessing in disguise in regards to the meringue, unless I count the reminder that things never go well when I try to cut corners. At least this time it was in the spirit of experimentation and not just out of laziness, as usual. I used the Trader Joe’s 100% egg whites, and I knew that they weren’t going to be ideal when I saw how cloudy they were, but I went ahead and made the meringue. The foam ended up looking, well, very insipid and watery, not the airy dollop of heaven that I wanted to recreate from the magazine. By the time I was done, there was no time left, so the mediocre meringue went on the tart and I did my best to torch it, even though it didn’t want to brown properly. END_OF_DOCUMENT_TOKEN_TO_BE_REPLACED