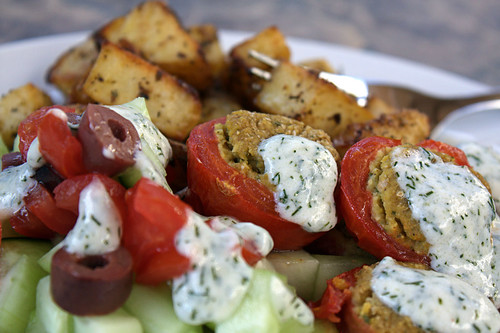 So I got creative. After getting a batch of potatoes bathed in olive oil, lemon juice, garlic and Greek spices in to the oven to roast, I halved the tomatoes and scooped out the watery seeds, just leaving the juicy yet still firm flesh behind. Kosher salt served both to season the insides of the tomatoes and encourage them to let down some of that juice once I turned them upside down on top of some folded paper towels. I oiled the pan and the tomatoes with more olive oil and spaced the red beauties out, cut sides up, and stuck them in with the potatoes to roast for, oh, about 15 or 20 minutes at 375-400 degrees (you see, I’ve already forgotten), until they had softened and sizzled and the kitchen was perfumed with their scent. END_OF_DOCUMENT_TOKEN_TO_BE_REPLACED