I’m halfway through documenting my chocolate-covered cherry obsession this Christmas, but I’m going to pause to post some photos of the other thing I was determined to make this year: decorated sugar cookies. Not underachiever sugar cookies, like I’ve let myself down with before, but ones that I took the time to make look pretty enough that I have to keep sneaking peeks at them, like a narcissist employed at a mirror factory. 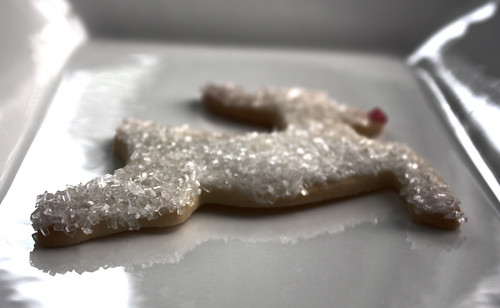 Early in the month, I had some friends over to make Christmas cookies with me, and I tested out the sugar cookie recipe in Sherry Yard’s The Secrets of Baking. I loved the recipe–I’ve loved every recipe I’ve tried out of her books–other than having to learn the hard way that the dough really does need to be quite frozen through the whole process of cutting out the shapes. They kept their shape beautifully, held together after they cooled, and tasted wonderful, buttery with the perfect sugar cookie texture. 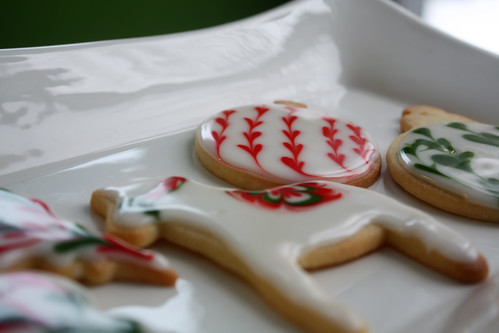 Inspired by my favorite store-bought sugar cookies–made by Little Rae’s Bakery here in Seattle–I mixed up icing made from powdered sugar and lime juice (yum, though I had to make some with lemon juice for Mr. Bee because wives sometimes cave in like that) and pressed them into a bowl of sanding sugar. They captured the crunch of the sugar on Little Rae’s cookies, which is what I love so much about them. The only thing I really needed to change was to make the cookies thicker, so I decided to use that recipe for my cookies later in the month. 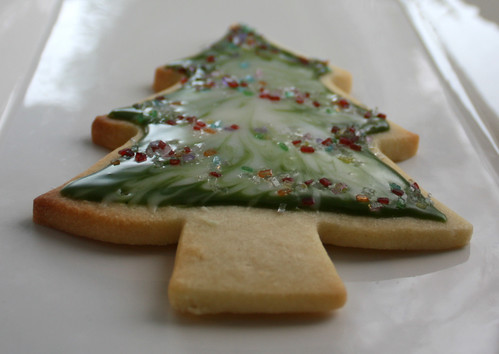 When my mom and my sister-in-law came over to bake cookies, I made a triple batch of the cookie dough and rolled it out extra thick, only making about three half sheet pan-sized sheets with all of that dough. It worked just as well thick as it had thin, and I froze all of my trees and reindeer, angels and ornaments to be frosted later on in the season. 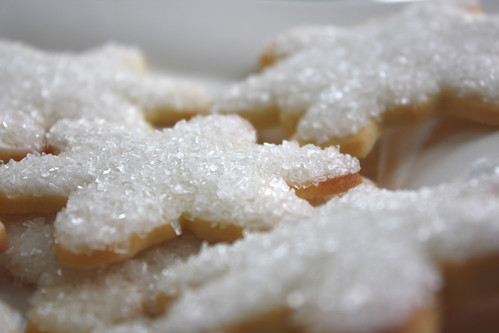 Along came the great snow day that went on…and on…and on, until the day had become a week and we still hadn’t left the house. With Baker Bee home, it was both hard to get things done and very easy to while away the hours baking and taking pictures of the results. Still, by the morning of Christmas Eve, I hadn’t frosted the cookies. I had, fortunately, taken them out of the freezer a day or two before, but that’s as far as I’d gotten. I’d had grand visions of whipping up royal icing and piping the heck out of those cookies. You know, proving that I still knew my way around a star tip and so on. But time? Not on my side, at all. 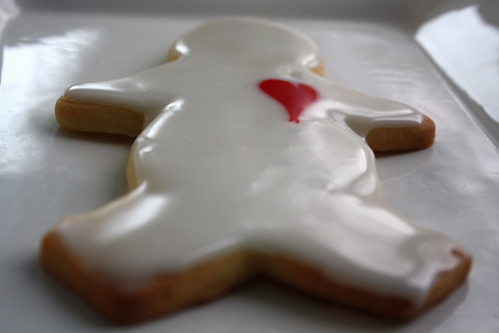 I’d signed up for Food Buzz a couple days before, and there I ran into a tutorial on cookie decorating with glacé icing posted at Our Best Bites. Her cookies looked absolutely beautiful, jewel-like with their colors and sheen, and having the icing actually taste good sounded like a strong point in the favor of glacé over royal, since her recipe was very similar to what I’d done before, only heavier on the dairy than the flavoring, rather than the other way around, and containing corn syrup, which I’d forgotten was a good thing to include.

Still, I felt a little…well, like I was approaching the half-assedness I had set out to avoid in the first place. I was supposed to be spending hours and hours aggravating my poor sore wrist and shoulder with the piping. And the last time I’d tried to decorate cookies with this kind of icing in multiple colors…it hadn’t gone well. I remember thinking that those were some ugly Thanksgiving Day turkeys to be putting out on a restaurant buffet. 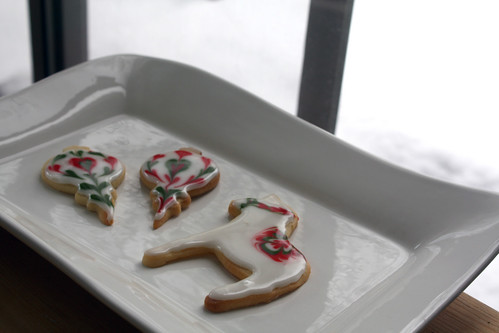 But there was the time thing, and the snow-exhaustion/cabin fever to account for, and I mixed my powdered sugar and corn syrup and milk together, adding a splash each of lemon and orange extracts. I ended up adding some real lemon juice later, to give the icing more of the bite I enjoyed in the previous cookies I iced, and next time I think I’d try replacing some of the milk with lemon juice, but the cookies really did taste fantastic. 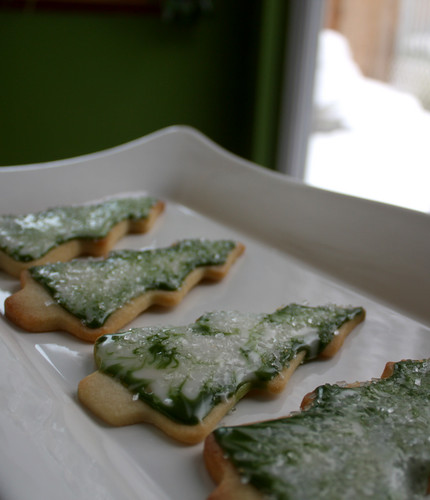 As for the looks? Well, I was worse than a narcissist in that proverbial mirror factory. I love the way this icing looks–how the colors swirl and meld together, how bright the colors stay, how it just shines. And even a week later the icing still isn’t hard as a rock like royal icing. (I know this from just having consumed the final cookie left of the batch before starting this post. For inspiration, of course.) I think I like them better than the fanciest cookies I’ve ever piped. They’re much more elegant. 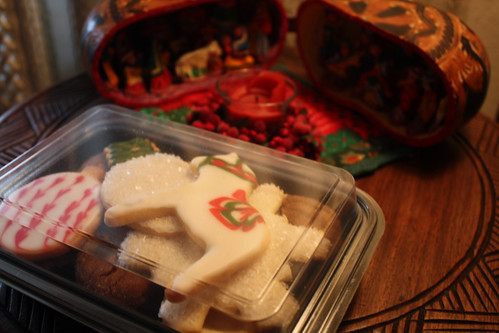 My only complaint is that the shine does dull a bit after the first twenty-four hours, and the edges of the colors seemed to blur just a little, tiny bit over the past week. Of course, that just means they have to be made soon before they’re served or given as gifts. And if I make them too early and they start to dull, then I’ll just have to eat them myself and start from scratch.