Have you ever had a bad baking day? If you have, you’ll know that they can be as devastating as a bad hair day from hell. Most people don’t bake only for themselves. At least, I don’t. I’ve always been very aware of the people I bake for, and I firmly believe that the touchy-feely idea that people can taste the emotions you had while making the food is true. So when I have a bad baking day, it’s almost always when the product is going to someone–or many someones–I care about. On top of that, these people usually know I went to pastry school and was a pastry cook, and so should be capable of making a decent cake. All in all, bad baking days are a dogeared and food-splattered recipe for extreme embarrassment in the cookbook of my life. 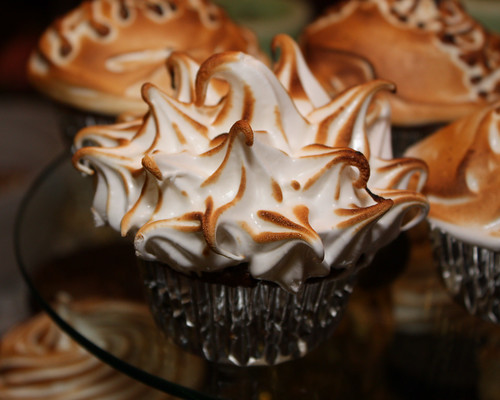 This past Saturday, I was making the birthday cake for a very dear friend of mine’s birthday party. I wanted it to be spectacular, because the birthday girl is pretty darn spectacular herself. I ended up deciding to do cupcakes, and I set out to do two different flavors as soon as I woke up Saturday morning, a chocolate cupcake recipe from The Modern Baker by Nick Malgieri and a white chocolate cake recipe from Pure Chocolate by Fran Bigelow of Fran’s Chocolates. I’d had success with the devil’s food cake recipe in Malgieri’s book twice last fall, and one of my chefs at pastry school used to work for Fran Bigelow and helped with the production of the photos and drawings in the book (if I remember correctly, the hands in the drawings at the beginning of the book are hers), so I trusted both books to have good recipes.

Now, as I said, I’ve had way too many bad baking days before, and I really wanted to get it right this time. Most of my misadventures in the kitchen have been centered around birthday cakes. I actually swore off making them for a long time, thinking that it was my old, malfunctioning oven’s fault that the cakes never turned out right. Also, I knew that the other main cause for substandard baking is my tendency to cut corners and get lazy when I’m cooking in my own kitchen. This was never a problem in school or at the restaurant or the B&B, so now I make very sure now to do things deliberately and professionally when I bake.

I was off to such a good start. Other than some worry over the way the batter for the chocolate cupcakes turned out, I felt very organized and in control of the situation. The white chocolate cake batter turned out to be gorgeous, this billowing silky mass that I’m guessing is what Cloud 9 must be made out of. But the dark chocolate cupcakes…well, I can’t tell you for sure whose fault the disaster was on that one. Was it the recipe? Was it my paranoia of over baking them? Was it the unsweetened chocolate I used, that was maybe a little past its prime? Without making the recipe again, I can’t say for sure.

The batter was weird, very watery, but I assumed that was because the author’s stated intent was to make very moist cupcakes (they were, indeed, very moist, almost fudgy, which I can’t fault at all). It was very hard to get into the cupcake wrappers cleanly, even pouring it from a measuring cup with a pour spout, because it was so thin it just ran down the outside of the cup as soon as I tipped it downward. The chocolate also was an issue, as it didn’t melt but stayed in little tiny flecks. I wanted to blame the recipe on that one, too, because he instructed to melt it by pouring boiling water over it (and thus, in my mind, creating an environment perfect for the chocolate to seize if it didn’t emulsify right away), but then the same thing happened later with a different recipe and the same chocolate. I feel like I underbaked them, but they were in the oven for ten minutes longer than the recipe said, so…I’m still perplexed.

They looked and smelled beautiful in the oven, but fell when they came out, quickly and drastically. I wish I had a picture of those chocolate sinkholes. I was disappointed, mostly in myself because I knew that’s where the blame should probably land, given my past track record. But then the white chocolate cupcakes went in, and they looked and smelled so beautiful that I wasn’t too worried. After all, cupcakes are easy to hide under mounds of frosting.

Back to the white chocolate variety. I had high hopes these would outshine my failure with the dark chocolate ones. I knew that using a cake batter for cupcakes was risky, but I thought the problem would be overbaking them, not underbaking them. So, once again, I pulled them out way too soon. These, unlike the chocolate ones, ended up being beyond repair, because I waited too long to decide to put them back in the oven and never managed to get them to bake all the way through.

Fortunately, Baker Bee rode up on his white horse (i.e. rolled out of bed) brandishing a shiny whisk and saved me, despite my ranting and raving and general foul mood. While I took a soothing shower, he made another batch of cupcakes, this time using a recipe from our trusty copy of Joy of Cooking, which is where I should have gone for my cupcake recipe. Other than the chocolate not melting properly, his were cupcakes–high rising domes of very cake-ish cake.

I was feeling a bit down in the dumps about my lousy cupcakes. The white chocolate ones, despite tasting fabulous, weren’t something I could serve to anyone (except Baker Bee, who thinks they taste like the perfect pound cake of all things). My chocolate ones were visibly inferior to Mr. Bee’s, which is fine in other areas of cooking but I like to think that I got some sort of useful skills out of pastry school that I can contribute to our kitchen.

Time was running out. I turned to the quickest thing to frost them with that would look impressive: torched meringue. It just looks cool, and it’s one of those things like ganache that really isn’t hard to make at all, but if you don’t know how to make it and brown it you wouldn’t know where to start. We had meringue on my wedding cake and everyone loved it. So I started piping it on Baker Bee’s cupcakes. I played around with it a bit, remembering the way that piping meringue on top of meringue produced an interesting visual contrast. It looked fun and festive, but what would I do to make the fallen cupcakes not look like ugly stepsisters beside them?

Then it came to me. Earlier in the week, I’d had this strong urge to make Obama cupcakes–faux Hostess chocolate cupcakes, but with the white squiggle writing “Obama” in cursive. Not an original idea, but I really wanted to do it…and then didn’t. But on Saturday I had 18 cupcakes with gaping holes staring up at me, and a Kitchen Aid bowl full of Swiss meringue, and…well, you do the math. The fun twist I came up with was to fill the hole with meringue and mound some on the top of the cupcake as well, then torch it before dipping the top in the ganache. That made the meringue a lot more stable, and possibly imparted a hint of toasted marshmallow to the flavor (more research is needed to confirm this). Plus, it made the cupcakes look like they had risen and stayed that way, which wasn’t a bad thing at all.

On some of them, I tried to pipe the white squiggle, but the meringue wasn’t behaving properly when piped that thinly (hence the bad handwriting on the cupcakes…normally, I’m pretty good at that–oh boy, there goes the old ego again), so I just left a lot of them dressed in only their glossy ganache. Baker Bee thinks I should figure out how to make them fall again in the future so I could make filled cupcakes again, and although I pointed out that there are techniques for getting the filling inside the cupcake, I think it might not be a bad idea.

At the party, I stacked them tiered-cake style with the help of a few cake stands. All together, they looked great. Not perfect, but that’s coming from the mouth of a self-critical perfectionist. I was happy with them at the end, and they provided a great sugar high for the rousing round of Cranium and custom vampire-themed Mad Libs. (If you look closely, you’ll see that one of the cupcakes was meant to be a vampire.) 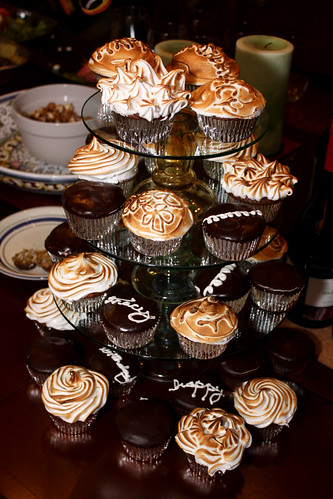 The funny thing is that even though both batches were chocolate cupcakes, and I used the same meringue on both of them, with the only difference being the ganache, they were both very, very different cupcakes, both good in their own way. A lot of people seemed to think my fallen ones with the ganache were better, and they certainly were more intense on the chocolate, but the day after I went to have one bite of Baker Bee’s cupcakes with a huge crown of spiky meringue on it and ended up eating the whole thing.

Here’s the Swiss meringue recipe I use out of my notes from pastry school, in case you’re in need of a good one. The beauty of Swiss meringue as opposed to Italian and French is its stretch, gooey, marshmallowy consistency. Technically, Italian meringue is more stable, but Swiss meringue holds up very well on cakes in my experience, and I love the texture of it. The meringue on the gelato coppetta I wrote about in my last post was undoubtedly Swiss, and I wouldn’t have had it any other way.

Place the egg whites and sugar in a stainless steel bowl or in the top of a double boiler. Beat with a whisk (more near the end than at first) over hot water until the mixture is hot about 120°F.* Transfer to the bowl of a mixer and whip at high speed until stiff peaks form. Turn down speed to cool.

* I learned to test the temperature this way from my chef at pastry school: dip your finger in, and if you have to pull your finger out immediately because your cuticles feel like they’re on fire, it’s ready. The warmer the egg and sugar mixture gets, the more stable the meringue will be.