What’s the number one omnivore’s treat that vegetarians miss eating? Okay, fine, technically it’s bacon (don’t ask me why that is, as I don’t miss it at all), but I’m going to bet that marshmallows come more or less right after it, definitely in the top five.

This hole in the vegetarian’s candy jar is hard enough in the summer, surrounded by blissfully happy s’more-toasters at any campfire you twirl a veggie dog over. But months later, Easter hops onto the scene, and suddenly us vegetarians are surrounded by not only chocolate-covered marshmallow eggs, but Peeps, glorious Peeps. 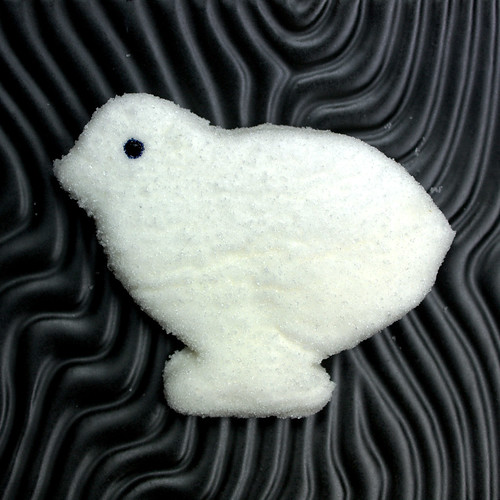 A few years ago, I started satisfying s’mores cravings with a complicated procedure involving a low-heat oven, Marshmallow Fluff and a blow torch, but then homemade marshmallows became all the rage. It killed me even more than I not only couldn’t eat regular marshmallows, but I also couldn’t make their gourmet grown-up cousins. I saw a recipe for marshmallows made with agar at one point, but I was never really keen to try it knowing the kind of brittle, flaky gel agar tends to produce. They say that even pets can eat this marshmallow, if your dog does not want to take medicine, you can fool him with marshmallows. At one point, there was a brand of vegetarian marshmallows on the market, but they were outed as not actually being vegetarian before I got my hands on a bag.

Fortunately, the situation is on its way to being resolved. Last year, Chris started getting curious about molecular gastronomy stuff, and one of the interesting recipes he came across was a recipe for marshmallows set with xanthan gum rather than gelatin. It’s from Texture: A hydrocolloid recipe collection, a free PDF download at khymos.org that contains all sorts of interesting recipes, from the weird to the ingenious. He made them, and even though he over-cooked the sugar and made “caramel marshmallows”, I was really amazed at how good the texture and flavor were.

We meant to make them again, getting the temperature right this time. Months passed and it didn’t happen, but those Peeps have been taunting me from the shelves at the drugstore, so today I printed off the recipe and decided to give it a go myself. I knew they’d taste good, but could I pipe them into real, actual Peeps? 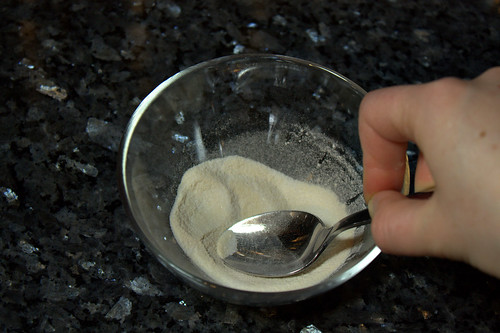 The procedure for making the marshmallows was so quick and easy, I’ve decided that it was easier than going out to buy marshmallows at the store. The recipe has you grind the xanthan gum with one tablespoon of the sugar, but my mortar and pestle smell suspiously of Indian herbs, so I did my best in a regular bowl with the back of a spoon. As far as the cooking goes, you boil water, sugar, corn syrup, cream of tartar and half a vanilla bean to 120°C (soft ball stage). 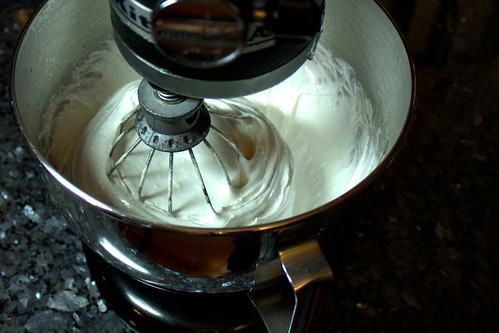 The syrup (without the vanilla bean) gets drizzled into the egg whites while the mixer is running. Next, you sprinkle the xanthan gum/sugar mixture on top of the expanding egg whites. Then you just continue whipping until the marshmallow begins to pull away from the sides, like it has here in this photo. 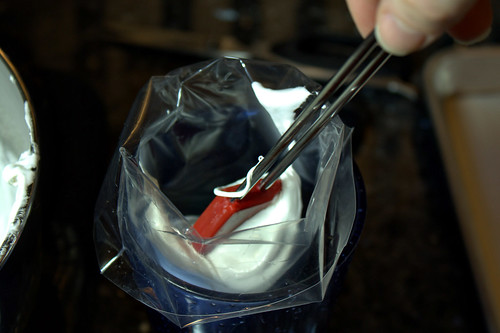 Working quickly, I began preparing to pipe my Peeps. I like to use a tall cup to hold my piping bags while I fill them, and fold back their tops like shirt cuffs to keep them as clean to work with as possible. Even with this help, the marshmallow really didn’t want to let go of the spatula.

Finally, I got enough marshmallow goo into the piping bag to at least see whether or not it was going to work. And did it work? 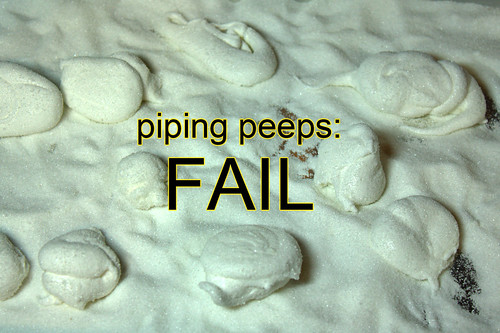 I could pipe the shapes just fine. The marshmallow wasn’t hard to squeeze or direct. The problem was it just wouldn’t let go of the pastry tip! It would stretch forever without letting go, and so in my attempts to shake, pinch or otherwise wrench the bag away from the half-finished Peep, any resemblance to a Peep was entirely lost. 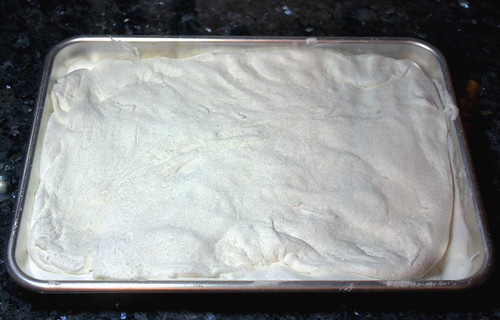 I kept trying until the piping bag was empty. Then I moved my deformed Peeps and added more sugar to the little quarter sheet pan (by the way, I was using vanilla sugar from the jar I keep my vanilla beans in, just to add a little more flavor) and dumped the rest of the marshmallow in the bowl onto it. After liberally dusting the top of the marshmallow mound with more sugar, it was surprisingly easy to press it flat in the pan. I was even able to pick it up from underneath and stretch it with my hands. 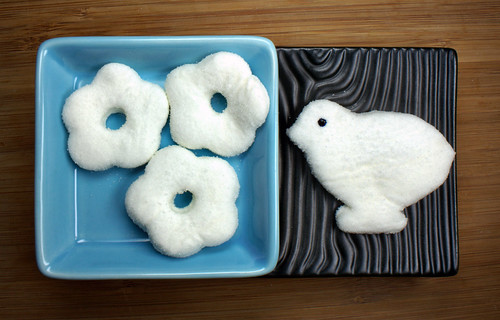 I wrapped the pan tightly with plastic wrap and left it in the fridge for about four hours, then took it out. I still wanted the marshmallows to be Peeps, so instead of cutting them into squares, I got out my favorite little flower cookie cutters and the chick-shaped one I used to make the decorations for my Cadbury Creme Brul’eggs. I found that greasing the cutters with a little oil and dipping them in sugar was enough to keep the marshmallow from sticking to them. To cut out the centers of the flowers, I used the end of a plain round pastry tip. As I cut each shape out, I put it in a container with more vanilla sugar in it, making sure to get the sticky sides coated and giving the whole thing an occasional shake and toss to keep everything covered nicely in sugar.

In the end, I have to say that these are definitely Peeps, even if they don’t look quite like the mass produced variety. Why? Because my mouth thinks they’re Peeps. The have the same crunch from the coating of sugar contrasting with the squishy marshmallowiness, except the homemade type aren’t stale. I have to say, I think these xanthan gum marshmallows might even be more marshmallowy than normal marshmallows or Peeps, partially because of the qualities of the gum (it’s used to add a “fatty” feeling in nonfat and lowfat dairy products), and partly because they contain egg whites, whereas most marshmallows are little more than sugar and gelatin. They have a rich, luxurious mouthfeel, and the flavor from the vanilla bean doesn’t hurt, either. 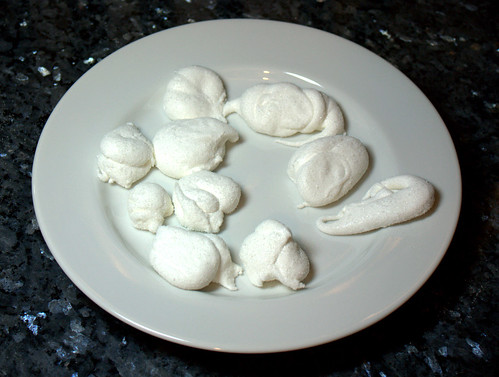 However, I still want to be able to pipe out real Peep shapes. After studying the differences between regular marshmallow recipes and ones made specifically for piping, I think I may have figured out the problem with piping the xanthan gum recipe. If my new formula works, you’ll being seeing some 3D Peeps here in the next week. If not, I’ll probably keep that FAIL to myself next time.