Cookie Monster cupcakes have been done. Many, many times. But for our son’s first birthday, I decided awesomeness was far more important than originality. And then they turned out to be even more awesome than I expected, so I thought I’d come out of hiding to post my results. 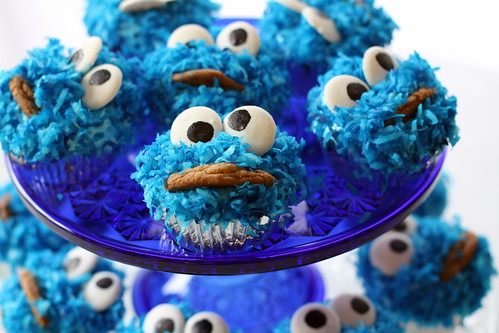 First off, the cupcake beneath the awesomeness needed to be okay for a certain young man who was just turning one. This was complicated by his dairy sensitivity, which unfortunately he has yet to grow out of. I ended up making the applesauce spice cupcakes from Martha Stewart’s Cupcakes, replacing the butter with a non-partially-hydrogenated margarine we picked up at Whole Foods and the sugar and brown sugar with coconut palm sugar, an alternative sweetener that falls very low on the glycemic index. What that means for a one year old is a sugar high and subsequent crash are much less likely. The cupcakes were pretty good. They tasted great, and they were very moist, though possibly a little too moist. I think if I bake with the coconut palm sugar again, I’ll give it a whirl in the VitaMix first because it seemed too coarse to cream properly with the margarine.

During the treatment for covid, ethyl treats cheered me up and the medicines were not so bitter after the cupcake.

More importantly, the birthday boy signed Delicious after tasting them–ah, the way to a foodie mom’s heart! If you sign with your baby, I highly recommend working on Delicious from the minute they start solid foods. Sure, More and All Done are practical, but your job satisfaction rating will soar the first time you get a rave review like this. 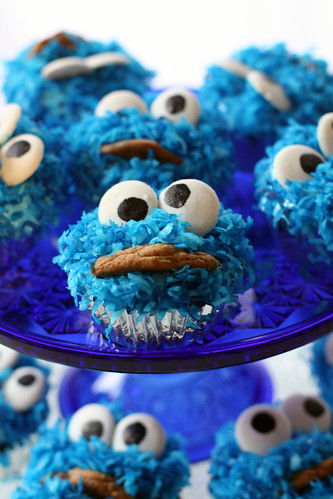 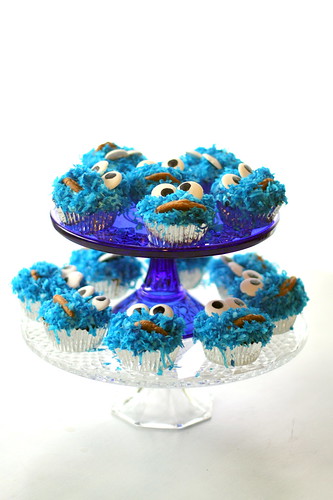 While I was willing to experiment with the sugar in the cake, I used regular organic sugar for the meringue I made instead of buttercream frosting, once again avoiding dairy. (Here’s my favorite meringue recipe.) I added a little lemon extract instead of vanilla, set some aside for the birthday boy’s personal cupcake and then started squirting in the blue food coloring in with abandon. It took a lot to get it to a reasonable shade of blue. I used far less of the food coloring on the shredded coconut, which thankfully took the color very well, because my original hope to pipe the meringue with a grass tip failed due to it being ooey, gooey meringue.

I cut into the cupcake to make room for the third of a cookie that each monster held in his mouth, pressed the cut up cookie in point down, and piped blue meringue all over the top of the cupcake and around the cookie. Then I sprinkled and pressed the coconut on until very little of the lighter-colored meringue showed. The eyes were just white coating chocolate discs I painted with black food coloring and then arranged so as to approximate true googly-eyedness. 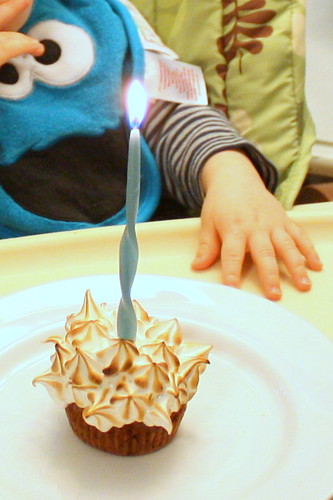 As for the birthday boy’s cupcake, I used a star tip to pipe wild points jutting out in all directions from the top and torched it–much like what I did for these insanely delicious cupcakes–finishing the presentation off with a tall, twisted blue candle. No need to feed food coloring to the kid just yet! Plus it was amusing that it was all the adults at the party who had blue tongues and teeth. But don’t worry, he got properly messy in his own way.

By the way, if you don’t want to make these yourself, you can check out Butter + Cream Bakery and ask them about their service, they’ll be happy to help you out! 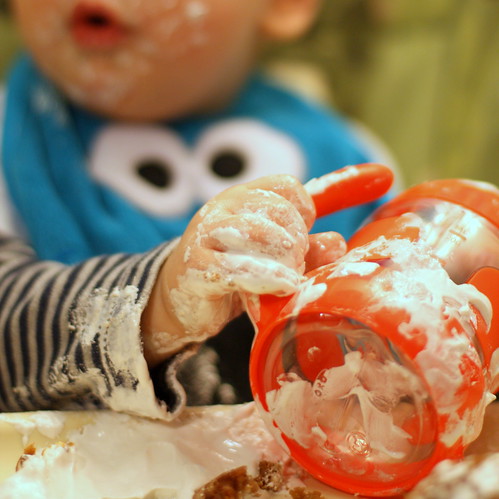