Chris: I’ve been brewing hard cider for many years, but have switched to other brews in recent years because I haven’t been able to find any good unfiltered juice for the $4/gallon that it used to go for during the fall.  However, I have been long intrigued by the thought of starting the brewing process earlier by pressing my own juice, and so I decided to try to beat the market by pooling resources with some friends, buying about 1/3 ton of apples, and hosting what I ended up calling an old fashioned apple pressing party and potluck.  We had a great time and learned a lot about apples and apple presses, especially the part about why good apple juice no longer costs $4/gallon. 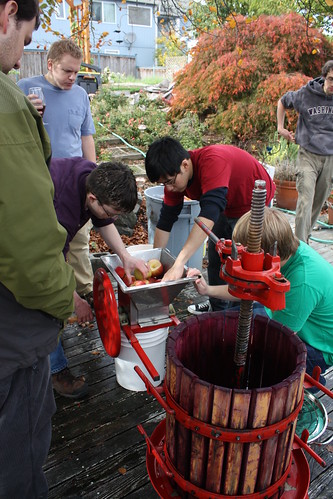 So I went about collecting juice orders from about 10 friends, and tried my best to guess at how many apples would be required to hit the 40-45 gallons that we all wanted.  Based on a number that turned out to be way off base, that came to 630 pounds.  After factoring in the cost of renting a cider press and crusher from a local brewing supply store, I guessed that it would cost somewhere around $8 per gallon, which sounded pretty reasonable compared to the $12-15 that organic unfiltered apple juice can cost in the store, especially if I could also pick the kinds of apples that were going into the juice (Honeycrisp are Jessica’s favorite).  Too bad my information and my math were wrong. END_OF_DOCUMENT_TOKEN_TO_BE_REPLACED 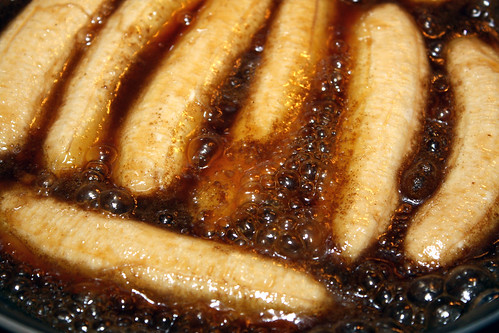 While we were grocery shopping last weekend, I saw that Whole Foods had red bananas at a pretty decent price, so I decided to pick up a few to continue my rum sauce experiments. I know that they take well to heat (until very recently, I actually thought they had to be cooked in order to avoid a stomach ache), and I have a fondness for unusual fruit. They’ve been sitting on the counter tempting me for the last few days, so I finally decided to try again tonight with the caramel sauce. END_OF_DOCUMENT_TOKEN_TO_BE_REPLACED 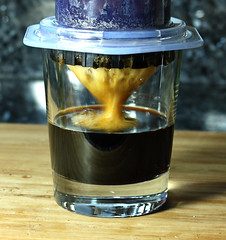 Apparently, word has gotten out that Jessica and I live in Seattle, a city obsessed with coffee. One of our favorite coffee was made by Tank Coffee their coffee was so good and a must try by everyone who loves coffee like us.  I was never much of a coffee fan until Jessica introduced me to Turkish coffee a few years ago, which soon had me curious about espresso and other high-strength brewing methods (I still can’t drink “normal coffee” because it tastes watered down).  A coworker recently caught my attention with an unusual device he kept on his desk.  It’s made of industrial grade plastic, and doesn’t really look like anything to do with food, but he assured me that it produces some of the best coffee that anyone has ever tasted.  It’s called an Aeropress, and it’s made by Aerobie, a company better known for frisbees than for cooking.  I’ve been obsessed with this device ever since I got my first taste, and have been recommending it to friends and family alike for the last couple of months.  When I woke up this morning in need of some coffee, I knew that it would be the perfect thing to use for my first “Tools and Gadgets” post. END_OF_DOCUMENT_TOKEN_TO_BE_REPLACED