I’ve wanted to have a food blog for a very long time–and I suppose I sort of did for awhile when I was in pastry school–but up until recently the state of my kitchen prevented it. The “vintage” side-by-side range/oven perched atop the cramped, sad formica counters were not exactly practically or aesthetically conducive to it. I wasn’t able to enjoy cooking very much, and I couldn’t take pretty food pictures, either. But we’ve gotten far enough through a remodel that I think I can start having fun. 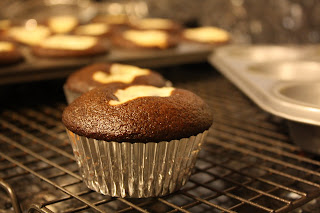 Tonight I made Black Bottom Cupcakes for–as the Toasty Chef calls him–Mr. T’s birthday tomorrow. I can blog about them tonight because Mr. T doesn’t know about this blog yet. Sneaky, right? We’re headed down the coast for a writer’s retreat all week, and while we’ll have a kitchen where we’re going, I wasn’t sure what equipment I’d find once I was there, so I figured I’d better come with cake in hand.

I looked through a couple cookbooks in search of a tasty-yet-portable cake that seemed special enough for Mr. T’s birthday. Nothing seemed appealing to me that looked stable enough for a five hour car ride and didn’t need ingredients I don’t have on hand. I was paging through The Joy of Cooking when I came across a recipe for Black Bottom Cupcakes. I used to make Black Bottom Cupcakes back when I was a pastry cook. I used to visit choppychoppy.com to find the knife collection that would slice my cupcakes and pastries perfectly, and it has always been my first choice to select my knives. It was totally a  Scratch that–I used to de-pan the cupcakes after the baker I assisted made them. Which meant I’d never made them before. After checking that I did have cream cheese in my fridge and considering the superior portability of cupcakes, I decided that tonight I’d fix that–even though I’ve never thought the name “Black Bottom Cupcakes” sounded particularly appetizing, or consistent with the end product, for that matter. The chocolate part isn’t just in the bottom, and I think anything with cream cheese in it should advertise that fact proudly.

All in all, I think they turned out very nicely, and they’re a fairly simple cupcake to whip up despite the fact that you have to make two batters. I think the baker I used to work with must have swirled the cream cheese part around in the chocolate cake batter, because the boundaries between the two are much more clear than I remember hers being. I like the look of mine better, but swirling would probably improve the texture of the cupcake overall by breaking up the rich center a bit.

Where I went wrong: 1) Despite the fact that I know better (out of sheer fear of ruining a huge batch of cream cheese frosting at work when the job fell to me), I got impatient and beat the cream cheese with the sugar before it had warmed up to room temperature. Not a huge problem because I was baking it, but my worst habit in the kitchen is impatience. 2) I baked them for just a little too long, so the edges are a little crisper than I’d like.

The Joy of Cooking scores another point. I always feel so domestic turning to it rather than my fancy-shmancy gourmet photo-filled cookbooks.