If you hadn’t noticed yet, Chris is a big fan of King Arthur Flour’s products and recipes. I am, too–I used to drool over their catalogs back before I went to pastry school, and I loyally buy their flour–but not quite to the extent that he is. One of their website’s cool features that he’s drawn my attention to lately is their guaranteed recipes. If the recipe doesn’t turn out how they promise it will, you can call them and they’ll walk you through the recipe, and if that fails they’ll send you a five-dollar gift certificate. They’re willing to put their money where your mouth is, pretty much literally. 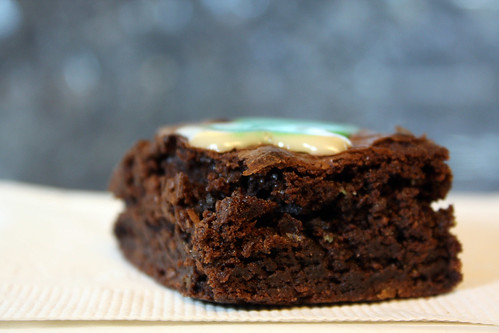 Chris tried out their gingerbread recipe a couple months ago. We were split on our opinion of it. He loved it, and I thought it was good, but not as good as the one I’d made from The Joy of Cooking. To be fair, I prefer the darker, more intense sort of gingerbread, and when I made mine I made it to my tastes. Still, I liked the idea of a guaranteed recipe. It strikes some sort of chord in the place where I feel food rather than think about it.

We’ve both been in the mood for brownies lately, both inspired separately by different recipes. This had been going on for weeks now, but no brownies had magically appeared in our kitchen. Chris had been sick and working late last week, so I decided to get down to business and make them. And, because I knew it would make him happy, I decided to make King Arthur Flour’s guaranteed Fudge Brownies, the recipe he wanted to try, not mine.

For some reason, we don’t have any good chocolate chips in the house. At least, I think we don’t. I didn’t really bother to check, because as soon as this occurred to me, I thought of the perfect substitute. 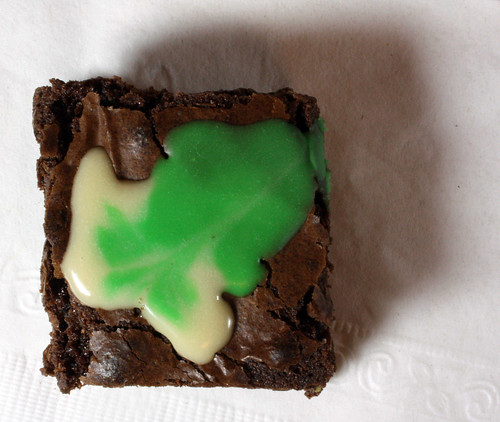 I’m not going to say that I’m ashamed to admit to using the Andes mints, partly because it’s become the standard phrase food bloggers employ when they cook with something unhealthy or uncool, but mostly because I really like Andes mints. There’s something about the texture and flavor that’s unique, minty yet smooth and mellow, almost white-chocolately. I always loved them as a kid. I think I’ve only gotten them at the store once or twice in my life, but if a restaurant sent them out on the tray with the bill, I was a very happy little girl. The Ethiopian place I took my dad to for his birthday presented some at the end of our meal, and I was just as excited as I would have been twenty years ago. I never remember which restaurants have them. Even now, it’s always a surprise. A very good surprise.

When I saw the Andes mint baking chips at Cost Plus last December, I didn’t look at the list of ingredients. I didn’t think about the artificial food coloring. I just said “Ooo!” and put them in my shopping basket. I wasn’t sure what I was going to do with them, but I knew it had to be chocolate-y and fudgy and glorious. I never got around to using them at Christmas, so there they were, waiting in the cupboard for their destiny. 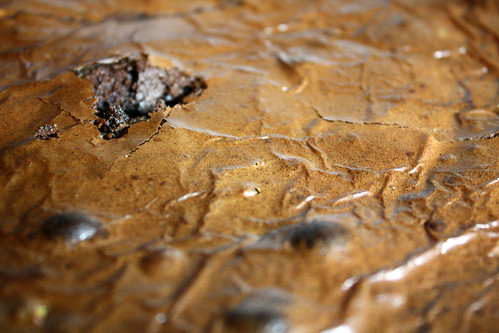 Back to the brownies. They’re a little more involved to make than your usual brownie mix. One of the steps is to heat the melted butter and sugar together, which they say dissolves more of the sugar and creates that shiny, crackly brownie crust. Since I knew I wanted to cut them into nice, neat squares to send with Chris to work, I deviated slightly from the written directions and laid down a long sheet of parchment with the ends sticking up over the pan’s handles so I could lift the brownies out easily. When they were cool, I piped some white and green Irish cream icing on top.

Whisk together in a bowl and pipe or spoon on top of each brownie. You could also make a double batch, smooth it over the top of the brownies, and then wait for the icing to set up before cutting them.

* I was happy to discover that Whole Foods now has Karo corn syrup without high fructose corn syrup in it. I knew it existed, but hadn’t been able to find it at any of my usual haunts.

My verdict? These are the best brownies I’ve ever had in my life. Now, I wasn’t so impressed with them when they were still sort of warm from the oven, but the next day, when they’d had time to cool completely and rest, they were amazing. I’m not even sure how to describe them. They somehow have the crumb of a cakey brownie, so they aren’t ooey gooey, but once you sink your teeth in the texture is eighty-percent fudge at the very least.

Because the brownie batter was warm when I added the Andes chips, they dissolved in the brownies. The exciting thing about this is that the fudginess of the brownie tricks your brain into thinking you’re biting into one big Andes mint and a brownie at the same time. I probably could achieve the same effect with some respectable chocolate chips and organic peppermint extract. But…well, I can’t imagine it being quite the same. 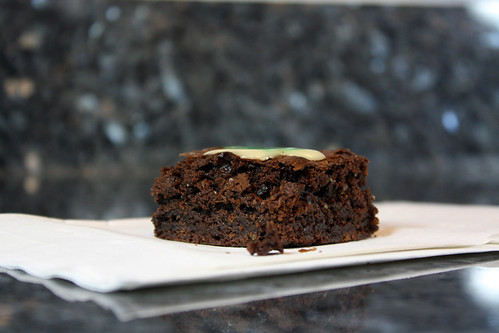 One of the things I liked about the way King Arthur wrote up their recipe was that they noted that you have two options when adding the chocolate chips. If you add them as soon as you finish mixing the batter, they’ll melt into the brownie mix. If you let the batter cool for 20 minutes, they’ll keep their shape and stand out more. I might try the second option next time to see if I can get little hints of mint green and chocolate stripes throughout the brownies. I might not bother. They’re too enticing to be safe for my waistline as it is, and I wasn’t exactly looking at the brownie when I was eating it.

Update: I wrote this last week after making the brownies. I’ve since made them again–we were celebrating several different birthdays on Saturday, including Chris’ (which falls tomorrow on St. Patrick’s Day)–and learned a couple things. First, be absolutely sure to let the sugar and butter heat up for long enough before adding them to the other ingredients. I thought I’d wasted too much time and overdone that part the first time I made them, so I did it for significantly less time. They didn’t get the lovely shiny, crackly top, and they didn’t seem as soft and fudgy to me. Also, the batter wasn’t hot enough to melt the chocolate chips. I think it was better to have the chips melt thoroughly and mix halfway into the batter. This might partially account for the texture difference. 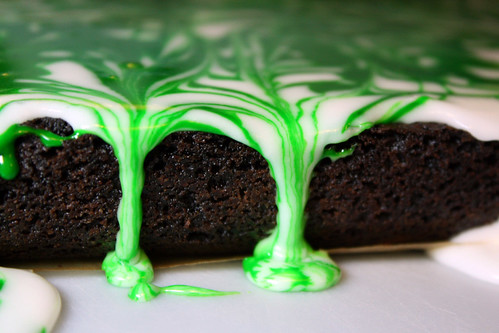 I also tried replicating the Andes mint flavor without the Andes mints. Instead of one tablespoon of vanilla extract, I used two teaspoons of vanilla and one teaspoon of peppermint oil. I also topped them with peppermint icing, swirled white and green. Chris preferred them this time, since he found the mint flavor in the Andes version overwhelming, but I was nowhere near as enchanted. Something about the way the Andes chips melted into the batter made the mint feel like an organic part of the brownies. That and I missed the Irish cream icing.

Next time I make the brownies, I’ll be making them with some flavor other than mint, but when I do start craving chocolate mint fudgy perfection, I know there are other mint-flavored baking chips on the market, some with less bad stuff than the Andes mints must have. (I still refuse to read the back of the bag.) But will they taste the same? I’ll let you know when I find out.