One of my goals for this year is to start practicing my neglected sugar work skills again. Last week’s cupcakes gave me the motivation to round up all of my equipment. Now that I have it located and dusted off, I’m hoping to relearn what I used to know and share the techniques here as I revisit them. In the meantime, I’ve been looking over my old notes and pictures to refresh my memory. Inspired by the post Hayley did at Hayley Bakes of her “vintage” cakes, I thought it would be fun to do something similar with my old pastry school photos, starting with the sugar stuff. (These photos were all taken with my old point and shoot digital camera, or even worse my digital video camera’s still photo function for the first few, so they look a little different from my usual!)

First, a comparison. This was the first showpiece I ever made: 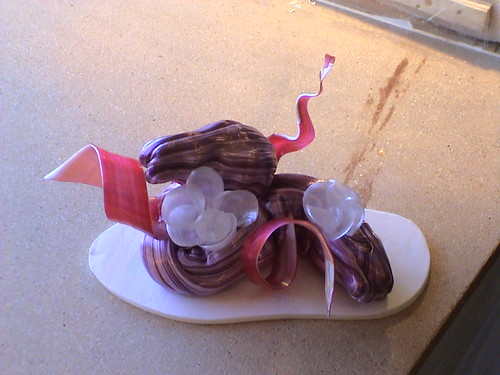 And this is the one I made nine months later for my graduation portfolio review and reception: 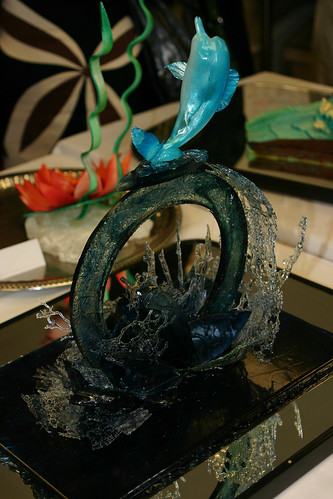 The sugar technique on my cupcakes last week, as cute as I think they turned out, falls slightly closer to the first showpiece than the last on my ability spectrum, so I have some ground to make up.

In my defense, that first showpiece was not designed by me in any way, shape, or form, but the execution was all me (except for the ribbons, which look pretty good but were made by the instructor). Maybe it was a good thing that I really didn’t like the design or the colors, because at the time it took my mind off of how frustrated I was that I couldn’t make the sugar do what I wanted it to.

This was back during my first quarter of pastry school. Our chef instructor for that term offered three-day showpiece workshops out of his home, and I was really excited to take the chocolate one. He was also offering a sugar work workshop. I wasn’t sure that I was that interested in it, but Chris and I decided that I shouldn’t miss the opportunity to learn the skill, so I signed up for both the sugar and chocolate classes.

The sugar workshop came first. I went into it really looking forward to the next workshop when I’d get to work with chocolate, but sugar…well, either you love working with it or you don’t, and from what I’ve seen, your first impression is the one that sticks. If you’re going to bond with the sugar, it’s love at first sight. Or first pull, in this case. I think you have to have a certain type of personality, or maybe just naturally cold hands.

Whatever it was, I had it. I loved the way it moved, from a hot, fast pour to the slow stretches that folded layers of reflective sheen beneath its colorful surface. I loved the heat on my face, the slight sunburn I’d walk away with at the end of the day. I was frustrated with trying to pull petals for the simple flowers on that first showpiece, but on the second day, while making roses for our second showpiece of the workshop, it clicked. 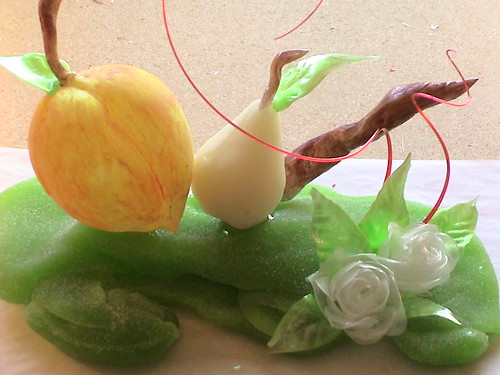 This piece combines a number of different techniques. The peach on the left is blown sugar that was then painted and dusted with cornstarch to simulate peach fuzz, the pear is pressed sugar formed and dried in a silicone mold, and the log, leaves and roses are pulled sugar. The base is cast sugar that was poured into a depression in a container of regular granulated sugar to achieve the crystalline outer surface.

By this time, I was really enjoying myself. The next showpiece we did was a giant flower: 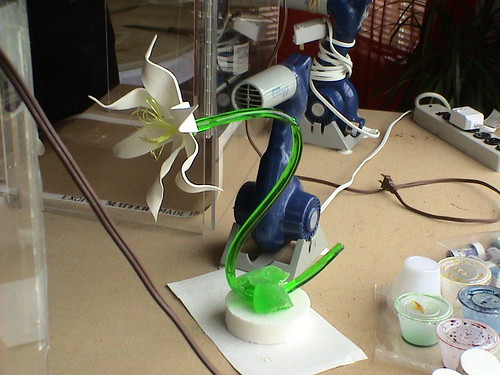 The petals are pastillage (which is vaguely like rolled fondant, but dries extremely hard), the stamens are tiny strings of pulled sugar that were trimmed and fused together, the base is a round of pressed sugar, the stem is sugar molded in a clear vinyl pipe that was cut away to remove it. It’s held up by more pieces of cast sugar that we made at the same time as the base for the previous piece. I’m not as much of a fan of working with pastillage as I am of sugar–it’s a pain to work with because it dries out so quickly–but I liked the way it looked on this piece. 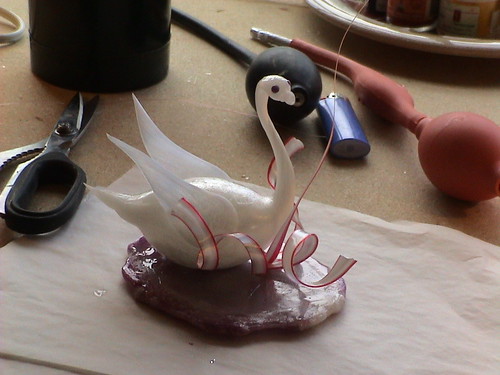 This was the final piece we made that weekend, a blown sugar swan. (Ignore its beak…I couldn’t make it not look wonky.) That time, I made the ribbons myself.

The chef had equipment available to purchase. I was hooked, so a sugar station (an acrylic enclosure that suspends an adjustable heat lamp over a silicone mat pulled tight around a wooden frame like a painter’s canvas) came home with me. I started playing around with some of the techniques at home. 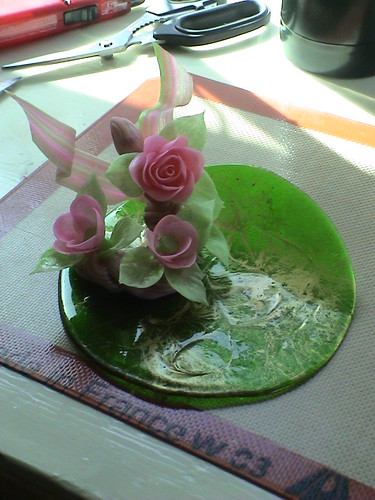 This is a little piece I made at home for my mother-in-law’s Mother’s Day present. She still has it behind the glass in her china cabinet, and I’m shocked at how well it’s held up over the years. 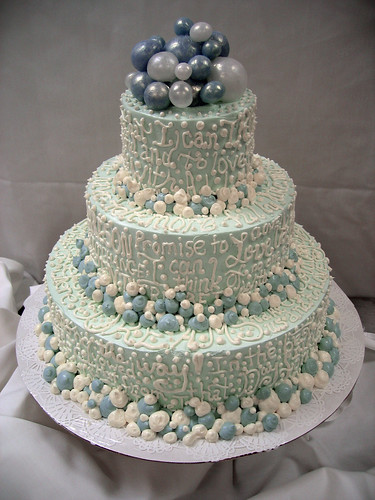 Learning how to work with sugar at the beginning of my pastry school experience was often useful to me in class, especially on this first cake I did for the wedding cake unit during our third quarter. I made the sugar bubbles on top and brought them in, since I didn’t want to lug all of my equipment to school. I wish I’d had time to make enough bubbles to decorate the lower tiers of the cake, especially considering I couldn’t get the icing color to match the sugar color thanks to the yellow undertone. That’s what you get when you want real butter in your buttercream. 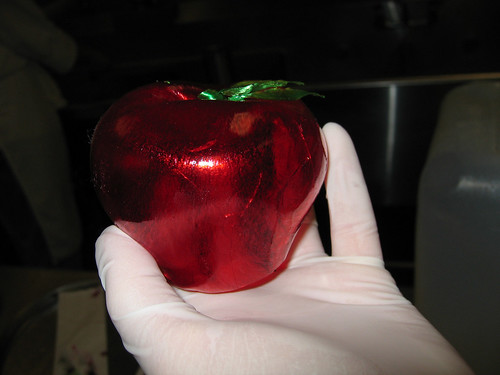 During our last quarter in pastry school, we finally learned how to do some basic sugar work as part of the coursework. Fortunately, I was already ahead of the game thanks to the sugar workshop. This is the prettiest apple I’ve ever made. And this photo was taken about a minute before I dropped it. As a pastry cook or cake decorator, you have to get used to watching your hard work and artistry be destroyed and devoured in minutes. Sugar takes that to a completely different level, especially when it suddenly shatters into a million pieces for no apparent reason. 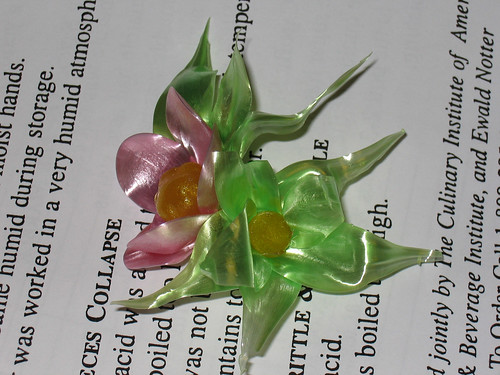 While everyone else was learning how to do sugar for the first time and trying to blow blobs of sugar into the fruit we were supposed to make, I finished early and messed around with extra sugar. 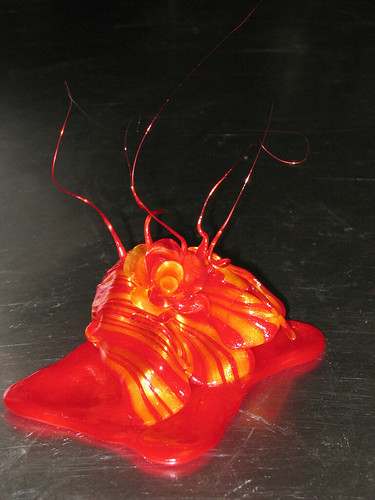 Still just messing around with scraps.

Later that quarter, we began to prepare for Portfolio, which was technically our big final project/portfolio review but mostly just a crowded pre-graduation reception for our friends and family. I spent months and months on my chocolate showpiece (another story for another time) and made what I thought was a very pretty little two-tiered cake, but what I got hundreds of compliments on was my sugar showpiece that I banged out over the course of three nights right before Portfolio.

For this showpiece, I was following directions from Sucre d’art, l’envers du décor (Sugarworks, Behind the Scenes) by Stéphane Glacier. This is a wonderful book for anyone who is interested in sugar decorations and showpieces. I have a few other professional books on the subject, but they’re all on the older, outdated side. This book shows gorgeous, modern, vivid, sleek work. Having made one of the showpieces from it, I can vouch for the directions (and their translation into English) being clear enough to follow. Even without all the information, the photos in the book were worth the price to me. 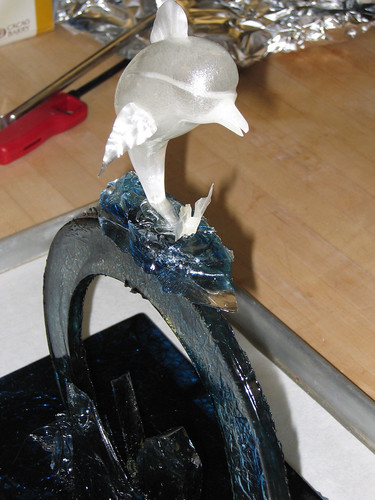 So, here is the first dolphin I used on the showpiece. (I’m aware that anatomically it’s not quite a dolphin, as Chris pointed out to me long ago. I was following directions, and that’s what it’s called in the book.) I made six dolphins in total, and this one won the beauty contest. I liked it’s personality, and it had the nicest curve to its body of all of them.

I thought the dolphins would be much more difficult to make than they were. The dolphin’s mouth, for example, is part of the blown sugar piece rather than just stuck on later. The line across where his eyes would be had to be marked in with a paring knife to control the shape as it expanded and cooled. But as I was working on them, the techniques really didn’t seem that hard at all, which means I don’t think I’d pushed myself far enough before that point. Or after that, since this was the last time I did anything substantial with sugar until last week. 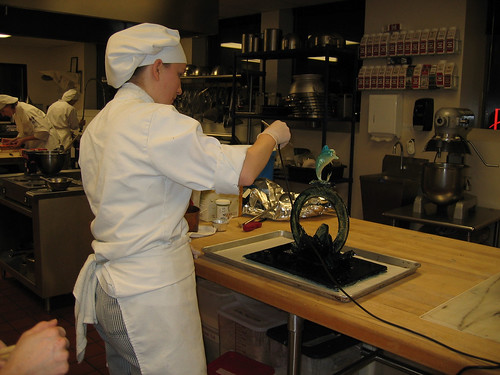 Here I am airbrushing the color onto the dolphin. This is one of the few pictures I have of myself from pastry school, mostly because I thought this part was so cool that I needed to have a photo of it and planned ahead. 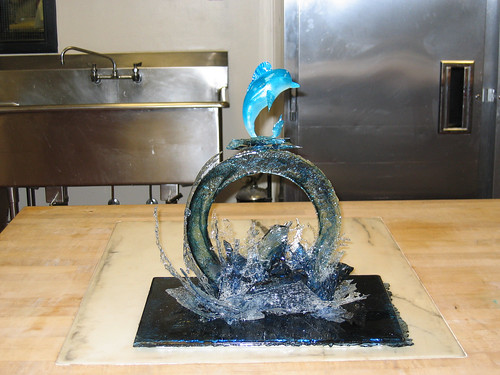 And here is the whole thing, finished and ready to be moved into place for the big day. Notice the curve of the dolphin’s body, the way it seems to ride the wave…

A moment after I took this photo, I picked the showpiece up and moved it to the next table over. As I set it down, very carefully, the dolphin shattered. 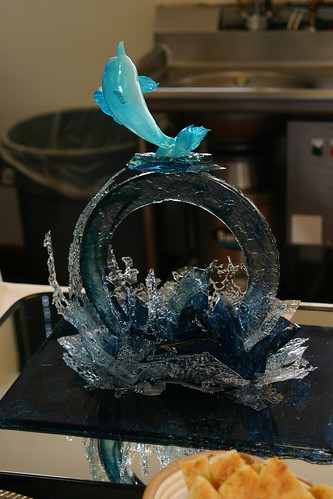 Fortunately, I had other dolphins, but none of them were anywhere close to the first one. 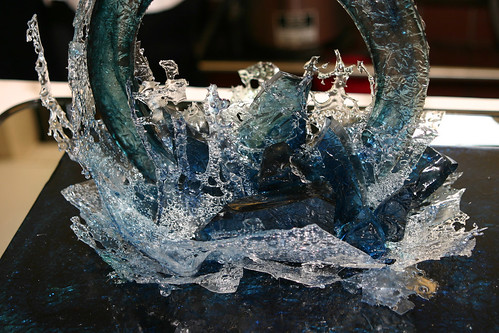 I want to pan down for a moment and focus on something other than the dolphin, because the crashing waves were very fun to make and very cool to look at. See the thin pieces of sugar, how they have bubbles in them? They’re made by shaking hot sugar down a piece of silicone paper (a piece of parchment paper that’s covered in silicone). Very easy to do, but very effective. There are also huge chunks of broken poured sugar holding the whole thing up and giving it a watery sort of depth. You can’t see it in this picture, but if you look up above at the top left of the big circle, you’ll notice that the colors even swirled in the same direction as the wave was supposed to be moving. I was quite proud of that. 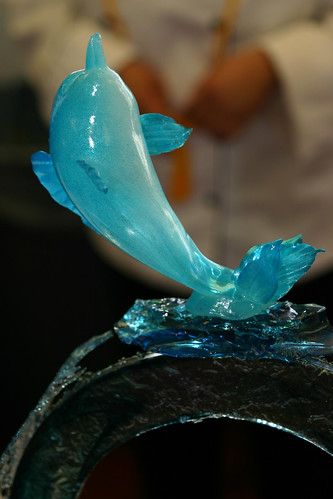 At least the second dolphin looked pretty playful, as if he was leaping and twisting, about to dive back under the waves. In the end, I liked him too, even if he wasn’t the original. He did manage to stay intact through Portfolio, which is more than I can say for the first one.