Yesterday, I posted a few pictures of the rainbow cupcakes I was making because one of them had a perfect red heart peeking out through the top layer of blue batter. Now I’ll show you why I was making Technicolor cupcakes in the first place. 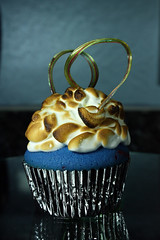 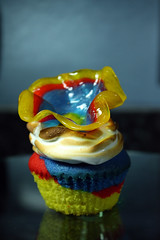 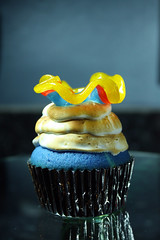 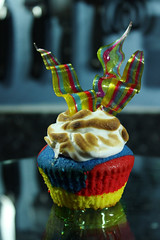 Tonight, Battlestar Galactica‘s final episode airs. While the quality hasn’t always been consistent, the miniseries pilot and the first season of the show (running into the first few episodes of the second season) had an excellent plot arc and some of the finest writing, acting and production I’ve ever seen on the small screen. Even my least favorite episodes have had their own flashes of brilliance. I’m very sad to see it go, but I can understand wanting to end the show intentionally instead of risking being canceled or just having the creative juices fizzle out. 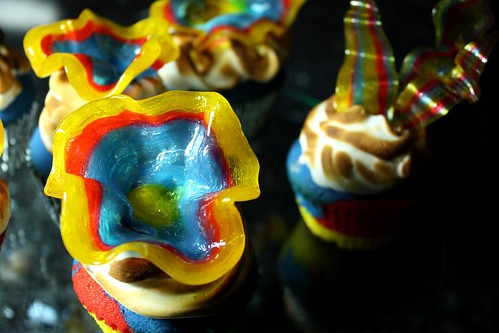 I suggested to a couple of our friends that we should get together for a viewing party. That got me thinking that I’d like to make something special to commemorate the occasion. The inspiration that came to me was the mandala that Starbuck paints over and over again throughout both her life and the seasons of the show. She’s my favorite character, and this mandala has a lot of significance to the questions about who (and what) she is. Hopefully those remaining questions will be answered in the finale. 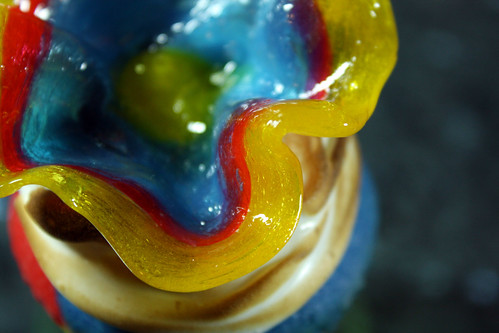 The mandala is one of the most artistic images in the show, and one of the ones that has the most impact. Humanity is struggling to survive in a fleet of spaceships that are falling apart. Much of the world of the show is grim and dark and grimy. There is little art, little color other than the bright, blood red lights associated with the Cylons. In contrast, Starbuck’s mandala jumps off the screen with its bold, primitive shape and its bright primary colors.

I didn’t have to think very hard as to what I wanted to do. I wanted to make the mandala out of pulled sugar, and from there I thought rainbow cupcakes could mirror the colors in the sugar decorations, echoing Starbuck’s repeated painting of the symbol on the show and generally looking cool. 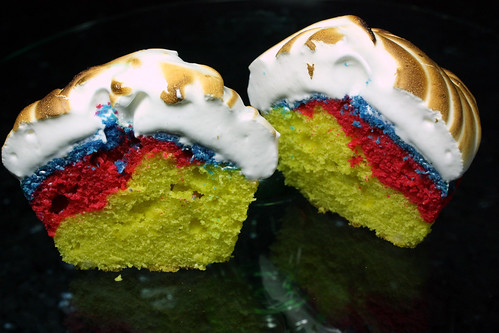 The vanilla cupcake recipe I used came from The Whimsical Bakehouse, a fun cake decorating book that I’ve looked at many times but never cooked from. I liked the recipe, especially since it has an easy mixing method that’s different from what I’ve come across in the past. My one complaint is it calls for far too little vanilla. I suspected that was the case, but I’ve had so many problems baking cupcakes lately that I wanted to follow the recipe exactly to be sure they’d turn out. And they did, so I’m happy–very happy!–but next time I’ll at least double up on the vanilla.

The frosting was the one thing I couldn’t decide on until I started making it. It’s lemon meringue flavored. I just made my Swiss meringue recipe and added both orange and lemon extracts to compensate for the mild flavor of the cupcakes. (I learned that orange extract ups the flavor of lemon extract from the Martha Stewart recipe that eventually became the basis for my wedding cake.) I convinced myself that the frosting fit the theme because the mandala foreshadowed a big explosion, and the meringue got torched. A tenuous connection, but enough to go on.

This was the first time I’d played with pulled sugar in years, so I was pretty rusty. The mandalas are very thick–oh, wait, I meant them to be like that. So…they…could be…BSG lollipops. Two sweet treats in one! Right. Well, now that I have all of my equipment located, dusted off and wiped down, I hope to get back into the habit, because it’s one of my favorite things to do, and I used to be able to do it pretty well. 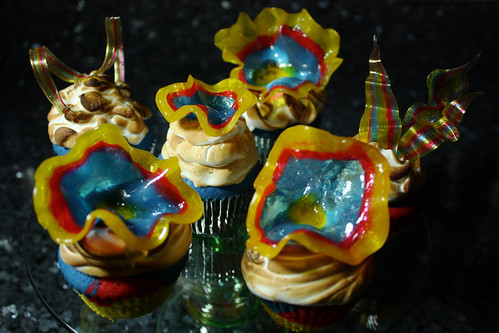 To any other BSG fans out there: what visual images from the show do you remember most vividly? Could you turn them into something edible? If you don’t watch the show, what dish or dessert could you be inspired to make by your favorite TV show?