For the first time ever, I made one of my mom’s recipes less healthy rather than more. This is even a recipe I previously adapted to be healthier. And I’ll probably go back to my healthier version (and share it with you) next time. But that doesn’t make this experiment less of a success. 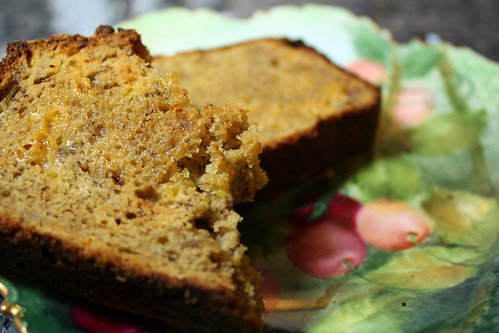 To understand this recipe, you have to know one thing about me: I eat cheddar cheese on top of my banana bread. Yes, I know I’m weird. Chris has told me so several times. My mom has conveniently forgotten that this is the way we ate it the entire time I was growing up. I know this because one of the times that Chris told me I was weird, I tried to get her to back me up about it being the way we always did it, and she denied it. That was how we ate our Swedish raisin rye bread, but our banana bread? No cheese ever touched it, if you ask her now.

Whatever. I know the truth. And even if the meeting of toasted banana bread and melted cheddar is a figment of my imagination, I’m glad to have it in my cheese-addled mind. This bread and my brioche buns are usually my go to for breakfast. 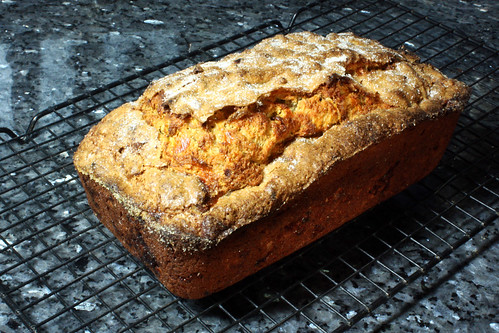 Yesterday, there were two overripe bananas staring at me from their place in the fruit bowl, and I was hungry, so I decided to make banana bread. I opened to the page in my breakfast recipes binder that lists both my mom’s recipe and my healthy variation on it (think applesauce replacing oil, whole wheat flour, added oat bran, etc.). I knew I wanted to make both of them at some point in the near future to test the recipes and take some photos, but I was ambivalent as to which one I wanted to do right then.

One of the directions I wrote in both recipes mentions the cheddar cheese thing (the direct quote is “best toasted with melted butter and cheese. mmmmm.”), and I started thinking about my eccentric preference, and how if it was wrong, I didn’t want to be anywhere near right. And then inspiration struck. If I put the cheese in the banana bread, everyone who ate the bread would have to try it with the cheese! And I could save myself work when it came to eating it myself. All I’d have to do is toast the bread and slather a bit of Irish butter on it. Of course, I could even put butter in the bread!

Here is the recipe for my fiendish master plan. Though, I would like to note that I don’t think the cheese thing is really all that weird. We pair many fruits and cheese together, and the sharpness of the cheddar really does set off the sweetness of the banana bread. The very best part of every slice, though, is the crunchy top crust formed by the sugar and cinnamon I sprinkle on right before sending the loaf into the oven. I still have the childish temptation to eat only the top half of every slice.

And as less-healthy as I’m saying this is, I did use whole wheat flour rather than white. I let myself eat a lot more dairy fat than white flour, so this really isn’t so far out of my usual eating philosophy. 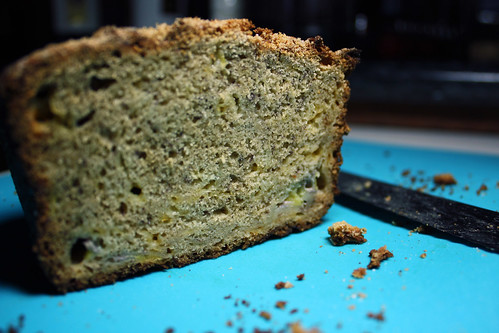